When distributing individuals into groups every week for a virtual social mixer, e.g. using Zoom breakout rooms, it’s boring to end up in a group with someone, who you already met last week. We compute the probility for this to happen and state a simple rejection sampling proposal for how to increase social diversity in such groupings. 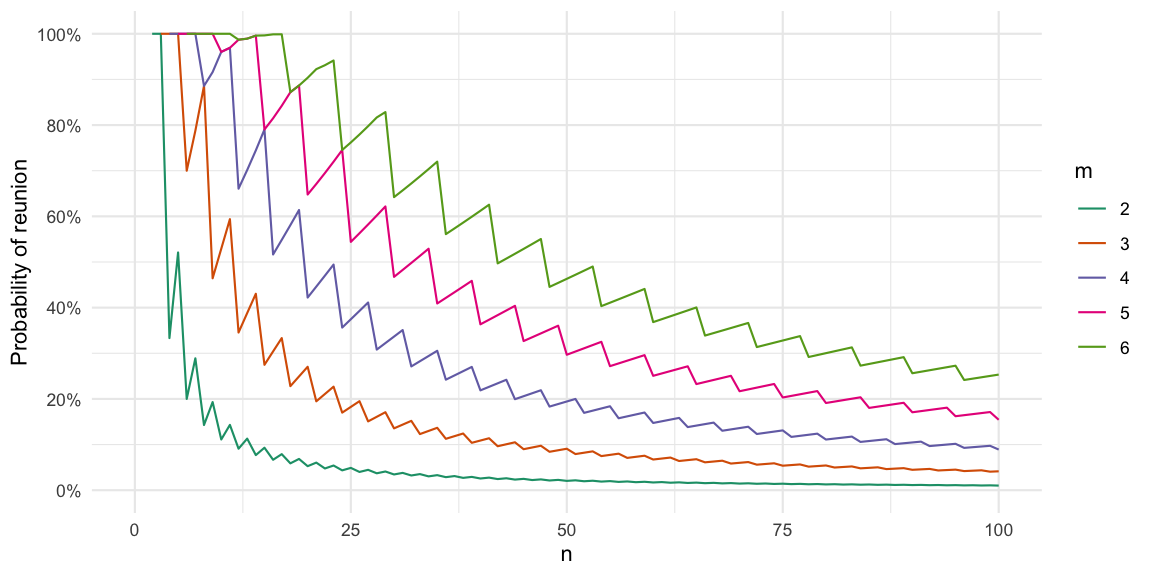 This work is licensed under a Creative Commons Attribution-ShareAlike 4.0 International License. The R-markdown source code of this blog is available under a GNU General Public License (GPL v3) license from GitHub.

As a pandemic replacement for the cross-division-chance-encounter in the coffee kitchen, it has become common to use a virtual social mixer format, where the \(n\) participants are randomly divided into groups of at least \(m\) people, e.g., for a video meeting or Zoom breakout rooms. Software exists to institutionalize such Random Lunches for, e.g., Slack. In this post we shall be interested in the properties of such group assignment algorithms.

A practical experience is that all too often, the algorithm assigns me to a group where at least one of the participants was already in my group the last time. Before accusing the programmers of writing a poor grouping algorithm: can we determine mathematically what the probability for such a “reunion” is? How can we modify the algorithm to avoid this?

Survey of the field

Arranging a fixed set of \(n=k\times m\) individuals into \(k\) groups of size \(m\) in subsequent rounds ensuring that no overlap occurs between the groups for as many rounds as possible is also known as the social golfer problem or round robin scheduling in combinatorics - and can be solved using constraint programming. Compared to the social golfer problem, we have the additional challenge that the group of people between rounds may be subject to change. Furthermore, \(m\) might not be a divisor of \(n\). Hence, somewhat closer to our problem is the so called maximally diverse grouping problem, where the grouping is to be done such that the requirements on group size are met and a diversity score over the elements in each group is maximized. For our setup, the score could, e.g., be time since the last meet between individuals. Integer programming can be used to solve the NP-complete problem.

However, in our application we will either ignore the diversity score altogether (i.e. set it to 1 always) or use a 0/1 diversity score (met last time or not). Furthermore, we are interested in random assignment algorithms selecting uniformly among the valid configurations. As a consequence, we choose a more probabilistic approach and instead use a custom group assignment algorithm as described in the next section.

We want to split the \(n\) individuals into groups of preferably \(m\) members. However, if \(m\) is not a divisor of \(n\) then after making \(\lfloor n/m \rfloor\) groups of \(m\) members we would have \(l = n - \lfloor n/m \rfloor\) individuals left. Instead of assigning these to a single leftover group, which would be of size less than \(m\) (particularly critical is size 1), we assign the remaining individuals to the \(l\) groups in round robin fashion. This ensures that each group has size at least \(m\). Note: Depending on \(n\) and \(m\) the resulting sizes might be larger \(m+1\), but the difference in the resulting group size will never be larger than 11. Let people be a tibble with a column id denoting a primary identifier key - this could, e.g., be the people’s email address. An R function to perform a random assignment of the \(n\)=nrow(people) individuals into groups of at least \(m\) could look like:

Example: Let people denote the population of 47 individuals to be assigned into groups of at least \(m=4\) according to the above description.

This leads to 11 groups with between 4 and 5 members. We can visualize the group allocation as a graph, where each group will correspond to a fully connected sub-graph, but with no connections between the sub-graphs. 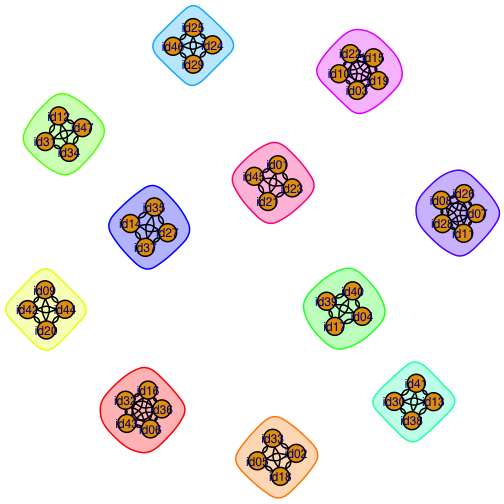 The mathematical question is now: Given you were in the group with \(l\) other persons the last time, what is the probability that after assigning \(n\) individuals into groups of preferred size \(m\geq 2\), that you will be in the same group with at least one of them again this time2. Let \(m \leq k\) be the size of your group in the current assignment. Combinatorical considerations tell us the probability to meet at least one of the \(l\) persons again is:

The calculations in R and verified by 1000 Monte Carlo simulations:

We can illustrate this reunion probability as a function of \(k\) and \(n\). 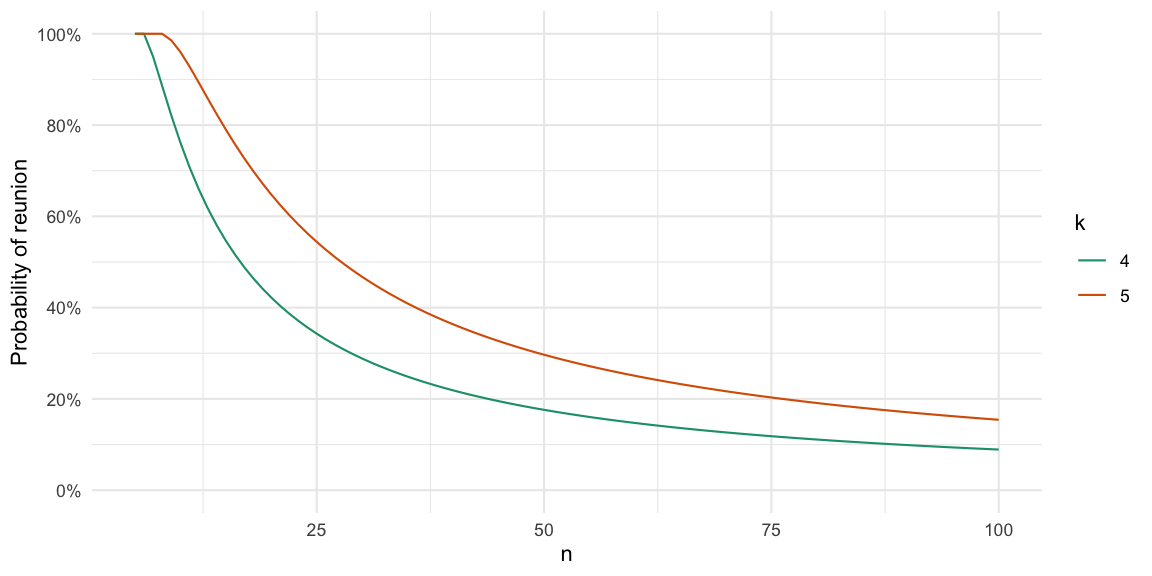 The result thus denotes the probability that you in two consecutive assigments of \(n\) individuals into groups of at least \(m\) individuals will be in the same group with someone twice. We will denote this the reunion probability. The graph below shows this probability as a function of \(n\) and \(m\) and is also available in a log-x axis version.

Why are the curves not decreasing monotonically?3 This is due to the minimum size \(m\) restriction on the group size. If \(m=6\) and you have \(n=12\) people then there are two groups. But if \(n=17\) while \(m\) is still 6, then we will still only have two groups as one would need 18 people for 3 groups. However, there are now 8 and 9 people in the two groups instead of 6 and 6 so the probability of reunion increases. Altogether, the probability increases from 12 and 17 until it decreases again at \(n=18\). Consequently, for \(m=2\) the peaks would be at the even \(n\) and the troughs would be the odd \(n\).

Given our \(n=47\) and \(m=4\) we also note the high probability of 22% for a reunion, which confirms our empirical experience. Thus there seems to be a need to impose some additional constraints on the grouping in order to optimize social diversity. For a translation of \(m\) into the number of breakout rooms used in Zoom, see Appendix A.

Let pairs be a tibble with columns id1 and id2 denoting all pairs of individuals who were placed in the same group the last time. We now want to enhance our group allocation algorithm to only assign people into groups, if they were not in the same group the last time. We do this by a simple rejection sampling algorithm, where we draw a configuration with sample_groups, check if it has overlaps with the last allocation, and if so, draw again. This method is not very efficient and might take a while. Even worse: it might not finish at all, if no configuration satisfying the constraint exist. An example is, if 9 individuals are to be divided into groups of at least 4 two times without any reunions. The corresponding code of such a sample_groups_avoid function is available in the R code from GitHub. This can then be used to generate the desired grouping without reunions:

In other words: No reunions, just as we wanted.

We considered random groupings used, e.g., in lunch roulette or when distributing students into breakout rooms. Depending on the number of people to group and the anticipated group size the probability for a reunion with somebody from last weeks grouping is surprisingly high. Hence, we use rejection sampling to propose a configuration, where no reunion occurs. The resulting grouping can easily be exported to a CSV file for import when making pre-assigned Zoom breakout rooms (example in the R code on GitHub). Even better allocations might be possible as part of solving the maximally diverse grouping problem. For further combinatorics posts, see also my work on the birthday problem with unequal probabilities.

Thanks to Dirk, Titus and Filip for the challenge.

Since the Zoom grouping does not work by specifying the number of individuals in each group, but instead the number of groups, we show an equivalent representation of the reunion probability graph as a function of the number of groups, i.e. \(\lfloor n/m\rfloor\). Since we did the math in \(m\), not every breakout room size is found. This also means that the shown graph is only an approximation, because the Zoom allocation algorithm is likely to work slightly different to our proposed sample_groups algorithm. 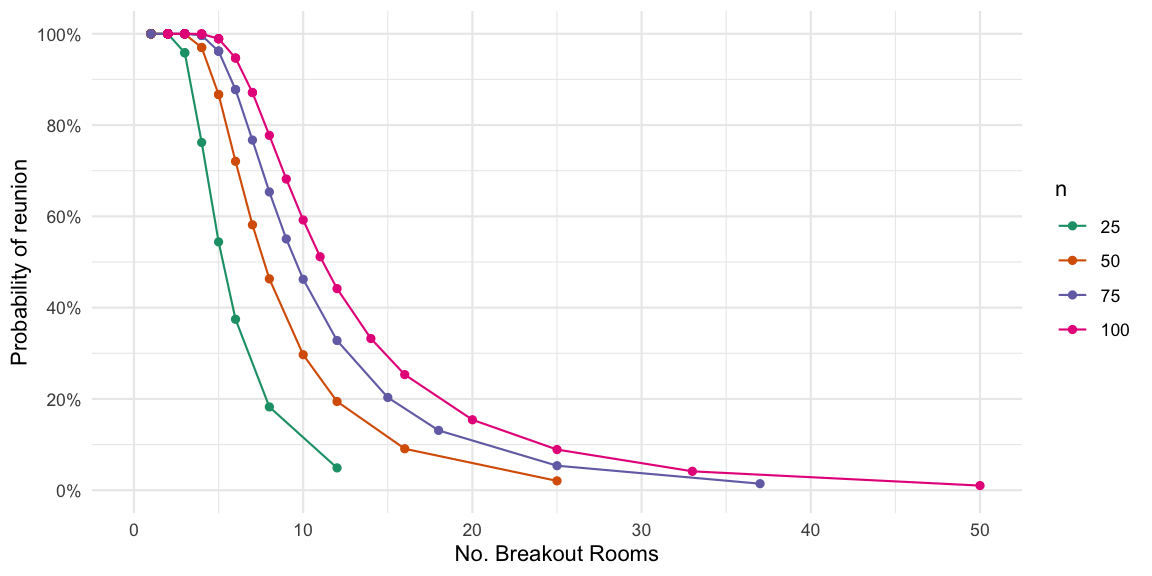 As a consequence from the calculation and functions from this post we can now answer the following question from our SU Mathematical Statistics Zoom Christmas Party announcement:

At 15:00 We will use the breakout room Zoom function that randomly divides the participants into smaller groups (5 persons). At 15:15 and 15:30 we will randomize to form new groups. The natural question that arises is: what is the probability that you and some other colleague spend the entire 45 minutes together?

Through simulations (details in the code) built on top of the sample_groups function we determine that the requested probability when \(n=30\) participate in the X-mas party is 7.6%.