Continuing the analysis of first names given to newborns in Berlin 2016, we solve the following problem: what is the probability, that in a school class of size \(n\) of these kids there will be at least two kids having the same first name? The answer to the problem for classes of size 26 is 34% and can be solved as an instance of the birthday problem with unequal probabilities. R code is provided for solving the problem exactly for moderate \(n\) and approximately for larger \(n\). For the case that all probabilities are equal, our results are compared to the output of R’s lovely pbirthday function. 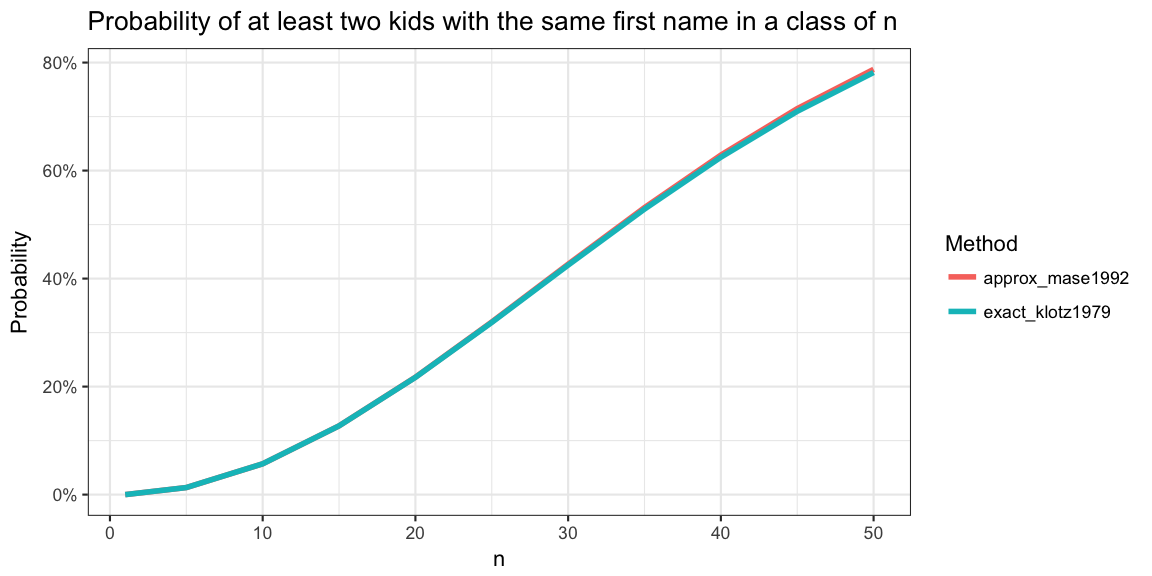 The previous post Naming Uncertainty by the Bootstrap contained an analysis of first names given to newborns in Berlin 2016 (Landesamt für Bürger- und Ordnungsangelegenheiten Berlin 2017). For instance, Marie and Alexander were the top names among girls and boys, respectively. In a comment Maëlle asked what’s the resulting probability that there will be kids with the same first name in a school class? We implement equations by Klotz (1979) and Mase (1992) in R in order to answer this important question.

The above posed question is a variation of the birthday problem, which every statistician has solved at least once in an introductory probability class: in a class of \(n\) randomly chosen persons, what is the probability that some pair of them will have the same birthday? Assuming that there are \(N=365\) possible birthdays and all birthdays are equally probable the answer can be calculated as:

where \((x)_n = x! / (x-n)!\) is the so called factorial polynomial. Say we are interested in \(n=26\), which is the maximal allowed class size in Berlin’s elementary schools (§4, Sect. 8 in the regulation). We can perform the necessary calculations either directly or by R’s pbirthdayfunction.

Finding the pbirthday function as part of base R was a bit surprising, but just underlines that R really has its roots in statistics!

In our problem \(N\) corresponds to all possible names of newborns in 2016. For the analysis we only group by first name and thus do not distinguish between instances of the same name used for both girls and boys.

In total there are \(N=13245\) possible names. From the \(p\) column it also becomes obvious that not all names are equally likely. Had they been, the quick solution to Maëlle’s question would have been:

Less than 3%! However, we expect this probability to be much higher, if we start to take the unequal occurrence probabilities into account. So let’s do it!

That’s an 81 digit number! This is not ever going to happen. Instead Klotz (1979), based on generating functions, showed that the above equation corresponds to

The above computations have been made available in the R package birthdayproblem available from github:

As an example, for \(n=4\) all the necessary terms to sum can be found somewhat brute-force’ish by running through the following four nested for loops:

This function would then return the necessary sets for the \(n=4\) case:

which can be processed further as in the Klotz (1979) equation stated above in order to compute the probability of interest.

In the accompanying R code of this blog post the above \(n\) nested loops are constructed by the function birthdayproblem:::make_tListFunc_syntax, which given \(n\) generates the syntax of the necessary function nested loop function. Calling source on this syntax string then provides a proper R function to evaluate. A similar function birthdayproblem:::make_tListFunc_syntax_cpp is provided to generate an equivalent C++ function, which then using Rcpp’s sourceCpp function can be turned into an R function. As a side note: The nested for loops for increasing \(n\) quickly look foul, which earned it the predicate possibly the best nested loop ever in a comment of a stackoverflow post concerned with the many nested loops breaking the clang compiler on MacOS.

The above described syntax generation, evaluation and post-processing steps necessary to compute the desired probability \(1-P(\overline{C}_n)\) are all implemented in the function birthdayproblem::pbirthday_up (postfix: up for unequal propabilities) in honour of R’s pbirthday function. A method argument allows the user to choose if the nested-loops should be computed using "R", "Rcpp". As an alternative to the this exact solution by Klotz (1979) one can also compute an approximate solution described in Mase (1992), which is of the impressive order \(O(1)\) while being extremely accurate (use method="mase1992"). The R method works in acceptable time for \(n\)’s up to around 35, the Rcpp runs \(n=60\) in less than three minutes; for larger \(n\) the approximation is to be recommended if you don’t like waiting.

With all code in place we finally can provide Maëlle with the correct answer to her question:

In other words, the probability of having a name collision in a class of \(n=26\) is 34.0%. If local politics would decide to increase the maximum class size by one, the resulting probability for \(n=27\) would be: 36.1%. One more reason against increasing school class size?

We first test the birthdayproblem package’s pbirthday_up function on the classical birthday problem with equal probabilities:

Speed-wise, the R looping approach takes 385s to compute the result for \(n=40\). The Rcpp approach on the other hand works in just 61s. The approximation by Mase (1992) only takes 0.021 s. To assess the quality of the approximation we consider a range of different \(n\): It’s amazing to see how small the error really is.

We calculated that the probability of a name-collision in a class of \(n=26\) kids born in Berlin 2016 is 34%. Furthermore, we showed that clever mathematical approximations are better than brute-force computations, that stack-exchange rules and that Rcpp can speed up your R program considerably. Furthermore, you have been shown the best nested for loop ever! Finally, in honour of Jerome Klotz a screenshot of the Acknowledgements section of the Klotz (1979) technical report: