We perform an adjustment for observed-but-not-yet-reported cases (aka. nowcasting) for the epidemic curve of the Middle East respiratory syndrome coronavirus (MERS-CoV) outbreak in Korea, 2015. The analysis is based on the publically available WHO data and aims at illustrating how one could do real-time public health surveillance during critical outbreaks.

Short-range (0-6h) forecasts in the world of meteorology are also called nowcasts. The term has also found its way into real-time infectious disease monitoring where one of its uses has been to adjust the currently available epidemic curve during an outbreak for structural and reporting delays.

Whereas the original work in Höhle and an der Heiden (2014) was motivated by the large STEC O104:H4 outbreak in Germany 2011, one of our secondary motivations was to develop a tool the quantitative epidemiologist could use during similar high-profiled outbreaks (instead of having to re-invent the wheel during times of maximal stress). After my talk at the IBC2016 conference (slides of the talk - our received the Best Paper in Biometrics by an IBS Member in 2014 award), one of the questions from the audience was how much impact the work had in terms of being useful for other outbreaks. Besides an analysis of an Adenovirus outbreak and a recent analysis of an O157 outbreak, I was a little short on a convincing answer. In addition, when trying to make a quick analysis for the O157 outbreak with the currently available code in the surveillance package it became obvious that the nowcasting functionality in the package currently is a little rough and certainly in need of a user-friendliness polishing.

The structure of this blog entry is as follows. We first discuss and visualize the WHO data on the MERS-CoV outbreak. The findings from the descriptive data analysis are then used to set up nowcasts adjusting the observed epidemic curve during the outbreak for reporting delays between onset of symptoms in cases and the date the case report arrived at the WHO. Finally, we illustrate how to visualize a sequence of nowcasts during an outbreak using an animation.

Update 2020-04-21: Regarding the lack of convincing use-case mentioned above. Four years after writing this blog post I can now add: The nowcast functionality of the package is now in use by the public health authorities in several German federal states as part of their Covid-19 outbreak response, see for example Bavaria.

The data basis for our analysis is the WHO data on the MERS-Cov outbreak in Korea, which occured during May-July 2015. Of interest will be the delay (here measured in days) between the time point on which a case has the onset of its MERS symptoms and the day the WHO learns about this case. In other words we put ourself in the role of an epidemiologist working at the WHO and who during the outbreak has to report on how the outbreak is evolving in Korea.

As the outbreak is already over, it is easy to visualize the epidemic curve in retrospect. We do so for the date of symptom onset. 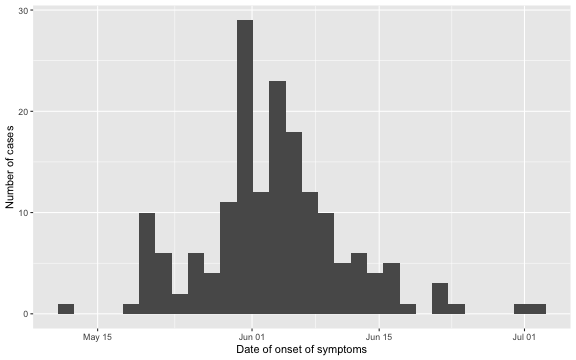 Furthermore, we can look at the delay distribution as it looks at the end of the outbreak. We shall later look in more detail at this distribution, but for now the plot gives an idea about the range of the delay: in most cases the delay is between 1-14 days, actually 97.1% of the observations have a lag smaller or equal to \(D=14\). As a consequence, we shall use \(D=14\) as the maximum relevant lag to adjust for. 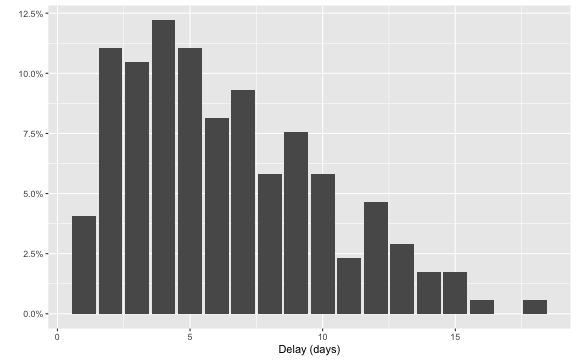 Instead of using ggplot to show the epidemic curve, this can also be done directly from the surveillance package using the function linelist2sts. This function takes a data.frame representing a linelist and converts this into an object of class sts (surveillance time series) used by the package. This then allows the use of all the plotting functionality of such objects as described in Salmon, Schumacher, and Höhle (2016). Note: For the nowcasting code of this blog entry to work, the newest development version of the package, i.e. version 1.12.2 available from Rforge using

is needed. The code then looks as follows: 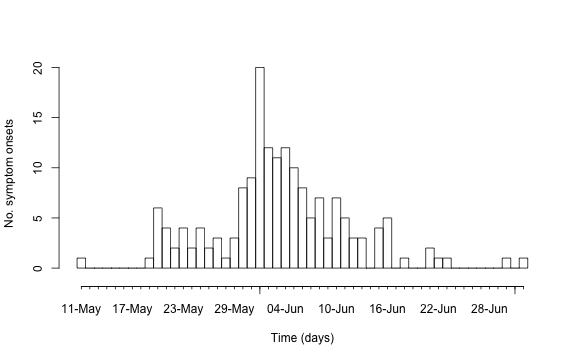 We now move on to the nowcasts.

Say (in a mathematical sense) we move back time to 2015-06-12. In the notation of Höhle and an der Heiden (2014) this means \(T=2015-06-12\). We want to illustrate what the WHO could see at this point and, on the basis on the available reports at time \(T\), estimate the delay distribution and adjust the observed cases accordingly. We shall here only use the right-truncation delay adjusted procedure operating on the generalized Dirichlet distribution. Since the nowcasts for the time points very close to now are very volatile (i.e. have very large credibility regions), it’s opportune to not display these casts as they can be very hard to communicate. Also note that the selected date for now is selected such that enough cases are available to give a sufficiently reliable estimate for the delay distribution.

We now perform right-truncation adjusted Bayesian nowcasting using the generalized Dirichlet distribution. An important choice is here the prior for the expected number of cases per day, i.e. \(\lambda_t\) in the notation of Höhle and an der Heiden (2014). In the conjugate case this is specified by assuming an iid. Gamma-distribution for \(\lambda_t\), which is specified through prior mean and prior variance of the Gamma distribution. We here select here an empirical Bayes inspired approach and estimate these parameters from the currently available data. However, note: These data are by definition of the problem incomplete. As a dirty fix we therefore just inflate the prior variance by a factor - as future work this needs to be improved upon by following a proper marginal likelihood approach.

The resulting object is of class stsNC, which is just a class inheriting from the sts class. Hence, all the usual plotting functions apply to it. In addition, a plot of an stsNC object as shown below, contains the median of the pointwise predictive distribution (thick blue line) as well as equi-tailed 95% credibility regions (dashed orange lines). 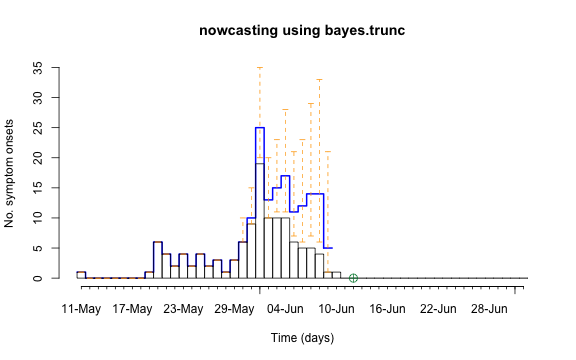 Finally, we can for stsNC objects show a simple non-parametric estimate of the delay distribution as a function of time using a window-smoothed approach with window width \(2w+1\), see Höhle and an der Heiden (2014) for details. 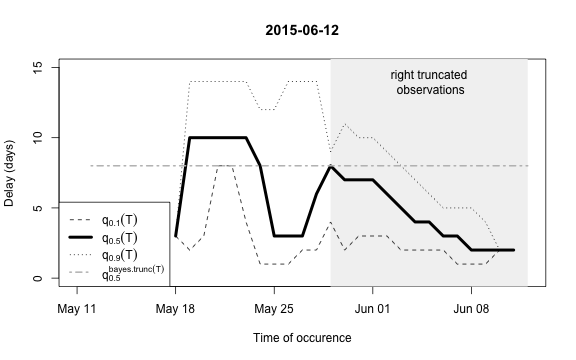 The figure shows for each time point \(t\) the median as well as the 10% and 90% quantile of the empirical distribution of delays within the window of \(t-w,\ldots,t+w\). Note: This simple estimate ignores the right- truncation, hence, within the period of (now-D):now there will be a bias of these estimates towards shorter delays. This biased period is illustrated in the figure by the light-gray shaded area. Furthermore, the median of the model based estimate for the delay distribution is shown for the period of (now-m:now). From the figure one has the suspicion that the delay decreased a bit over time, but the decrease totally at the end could also be due to right-truncation. However, assuming a time-invariant delay distribution for the entire outbreak would probably give unsatisfactory results. Hence, we shall for each time point use only a moving window consisting of all observations occuring within the period (now-m):now. We select \(m=14\) for estimating the delay distribution.

Showing a sequence of nowcasts

Once a couple of nowcasts have been performed it can also be helpful to visualize the sequence of nowcasts using an animation. This is easily done by first generating a list of nowcast results followed by a call to surveillance::animate_nowcasts.

As a final comparison we can also obtain an animation of how the delay distribution changes with time. From the animation we notice that the delay appears to steadily decrease, which is a typical behavior for high-profiled outbreaks. However, this also questions the assumption of a time-invariant delay distribution. Instead, one could use a window-limited estimation approach or one could try to model the delay distribution using a discrete time survival model as done in Höhle and an der Heiden (2014). The animation below uses the above mentioned sliding-window approach, which is noticed by the estimate of \(q_{0.5}^{\text{bayes.trunc(T)}}\) changing for each \(T\).

The adjustment of occurred-but-not-yet-reported-events applies to many other application areas besides real-time public health monitoring. For example, direct links to claims reserve modelling in actuarial sciences exist, but many other areas of application, where delays play a role, appear of interest. For the methodological details of the nowcasting procedures see Höhle and an der Heiden (2014), which is available as open access document. The present blog entry focused on getting methods operational using R - the R code of this blog post is available from github.

Work on the surveillance package was supported by the Swedish Research Council (2015_05182_VR).