In this post we use R’s capabilities to solve nonlinear equation systems in order to answer an extension of the hanging cable problem to suspension bridges. We then use R and ggplot to overlay the solution to an image of the Golden Gate Bridge in order to bring together theory and practice.

A cable of 80 meters (m) is hanging from the top of two poles that are both 50 m from the ground. What is the distance between the two poles, to one decimal place, if the center of the cable is:

Allegedly, (b) has been used as an Amazon interview question, however, the problem is much older and has otherwise nothing to do with Amazon. Can you solve (b)? Or even (a)? The problem can be illustrated as follows: 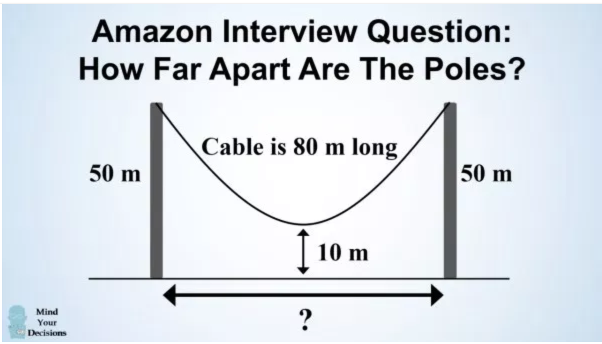 As explained in the video the catenary curve is the geometric shape, a cable assumes under its own weight when supported only at its ends. If instead the cable supports a uniformly distributed vertical load, the cable has the shape of a parabolic curve. This would for example be the case for a suspension bridge with a horizontal suspended deck, if the cable itself is not too heavy compared to the road sections. A prominent example of a suspension bridges is the Golden Gate Bridge, which we will use as motivating example for this post.

Rephrasing the cable problem as the ‘suspension bridge problem’ we need to solve a two-component non-linear equation system:

Here, the general equation for arc-length of a function \(y=f(u)\) has been used. Solving the arc-length integral for a parabola can either be done by numerical integration or by solving the integral analytically or just look up the resulting analytic expression as eqn 4.25 in Spiegel (1968). Subtracting the RHS from each LHS gives us a non-linear equation system with unknowns \(a\) and \(x\) of the form

Writing this in R code:

To ensure \(x>0\) we re-parametrized the equations with \(\theta_2 = \log(x)\) and provide the function theta2ax to backtransform the result. We can now use the nleqslv package to solve the non-linear equation system using a one-liner:

Using arc_method="numeric" instead of the analytic solution gives

Using the same code, but with the y-functions formulated for the catenary case we obtain

In other words the solution to the original cable problem is \(x=22.7 m\) whereas the answer to the suspension bridge version is \(x=23.7m\). The difference to the parabolic form can be seen from the following graph: 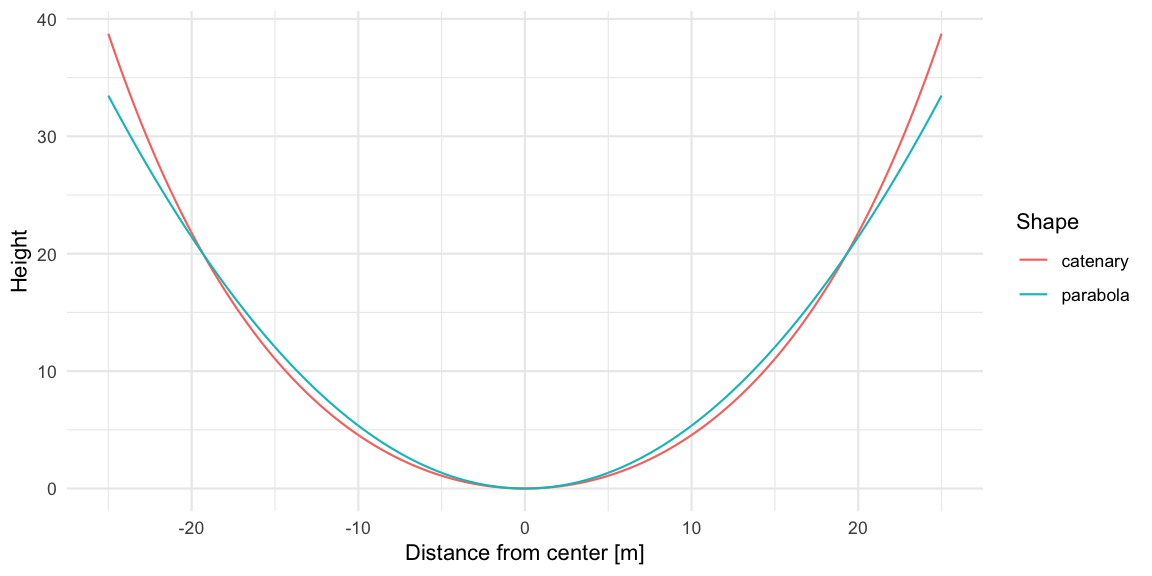 We test our theory by studying the cable of the Golden Gate suspension bridge. Shown below is a photograph by D Ramey Logan available under a CC BY 4.0 license. For presentation in this post the image was tilted by -0.75 degrees (around the camera’s view axis) with the imager package to make the sea level approximately horizontal. Parabolic and catenary overlays (no real difference between the two) were done using the theory described above.

We manually identify center, sea level and poles from the image and use annotation_raster to overlay the image on the ggplot of the corresponding parabola and catenary. See the code on github for details.

The fit is not perfect, which is due to the camera’s direction not being orthogonal to the plane spanned by the bridge - for example the right pole appears to be closer to the camera than the left pole2. We scaled and ‘offsetted’ the image so the left pole is at distance 640m from origo, but did not correct for the tilting around the \(y\)-axis. Furthermore, distances are being distorted by the lens, which might explain the poles being too small. Rectification and perspective control of such images is a photogrammetric method beyond the scope of this post!

This post may not to impress a Matlab coding engineer, but it shows how R has developed into a versatile tool going way beyond statistics: We used its optimization and image analysis capabilities. Furthermore, given an analytic form of \(y(\theta)\), R can symbolically determine the Jacobian and, hence, implement the required Newton-Raphson solving of the non-linear equation system directly - see the Appendix. In other words: R is also a full stack mathematical problem solving tool!

As a challenge to the interested reader: Can you write R code, for example using imager, which automatically identifies poles and cable in the image and based on the known specification of these parameters of the Golden Gate Bridge (pole height: 230m, span 1280m, clearance above sea level: 67.1m), and perform a rectification of the image? If yes, Stockholm University’s Math Department hires for Ph.D. positions every April! The challenge could work well as pre-interview project. 😉

Because the y_1(a,x) and y_2(a,x) are both available in closed analytic form, one can form the Jacobian of non-linear equations system by combining the two gradients. This can be achieved symbolically using the deriv or Deriv::Deriv functions in R.

where \(J\) is the Jacobian of the system, which in this case is a 2x2 matrix.

By iterating Newton-Raphson steps we can find the solution of the equation system manually: 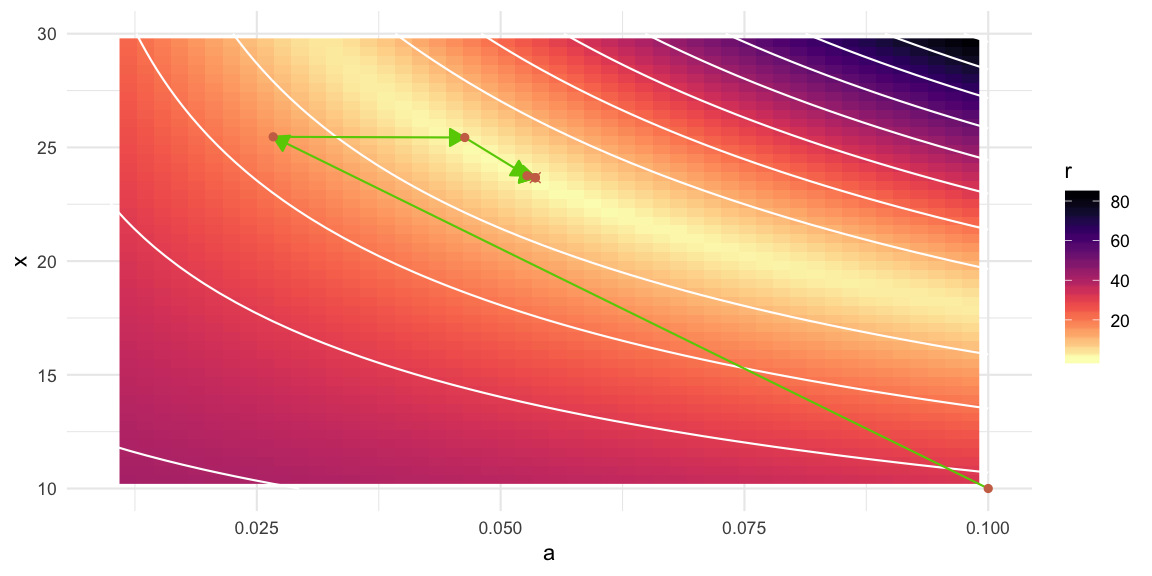