We work out the math behind the so called income mountain plots used in the book “Factfulness” by Hans Rosling and use these insight to generate such plots using tidyverse code. The trip includes a mixture of log-normals, the density transformation theorem, histogram vs. density and then skipping all those details again to make nice moving mountain plots.

Reading the book Factfulness by Hans Rosling seemed like a good thing to do during the summer months. The ‘possibilistic’ writing style is contagious and his TedEx presentations and media interviews are legendary teaching material on how to support your arguments with data. What a shame he passed away in 2017.

What is really enjoyable about the book is that the Gapminder web page allows you to study many of the graphs from the book interactively and contains the data for download. Being a fan of transparency and reproducibility, I got interested in the so called income mountain plots, which show how incomes are distributed within individuals of a population:

Screenshot of the 2010 income mountain plot. Free material from www.gapminder.org.

One notices that the “mountains” are plotted on a log-base-2 x-axis and without a y-axis annotation. Why? Furthermore, world income data usually involve mean income per country, so I got curious how/if these plots were made without access to finer granularity level data? Aim of this blog post is to answer these questions by using Gapminder data freely available from their webpage. The answer ended up as a nice tidyverse exercise and could serve as motivating application for basic probability course content.

Data on income, population and Gini coefficient were needed to analyse the above formulated questions. I have done this previously in order to visualize the Olympic Medal Table Gapminder Style. We start by downloading the GDP data, which is the annual gross domestic product per capita by Purchasing Power Parities (PPP) measured in international dollars, fixed 2011 prices. Hence, the inflation over the years and differences in the cost of living between countries is accounted for and can thus be compared - see the Gapminder documentation for further details. We download the data from Gapminder where they are available in wide format as Excel-file. For tidyverse handling we reshape them into long format.

Furthermore, we rescale GDP per year to daily income, because this is the unit used in the book.

The construction of the income mountain plots is thoroughly described on the Gapminder webpage, but without mathematical detail. With respect to the math it says: “Bas van Leeuwen shared his formulas with us and explained how to the math from ginis and mean income, to accumulated distribution shapes on a logarithmic scale.” Unfortunately, the formulas are not shared with the reader. It’s not black magic though: The income distribution of a country is assumed to be log-normal with a given mean \(\mu\) and standard deviation \(\sigma\) on the log-scale, i.e. \(X \sim \operatorname{LogN}(\mu,\sigma^2)\). From knowing the mean income \(\overline{x}\) of the distribution as well as the Gini index \(G\) of the distribution, one can show that it’s possible to directly infer \((\mu, \sigma)\) of the log-normal distribution.

We can use this to determine the parameters of the log-normal for every country in each year. 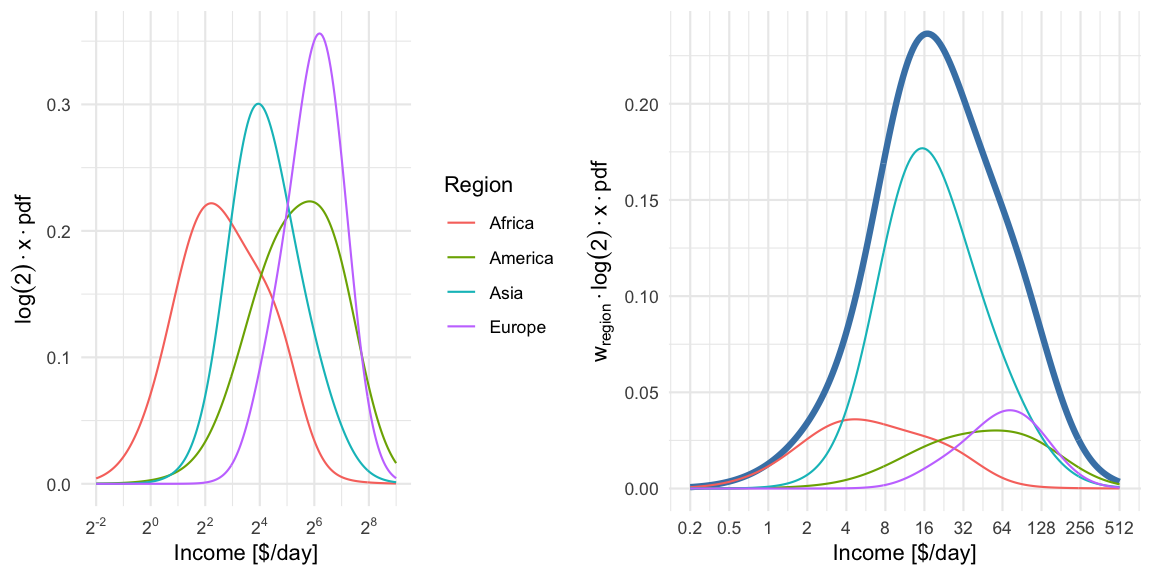 In the right pane we then show the region specific densities each weighted by their population fraction. These are then summed up to yield the world income shown as a thick blue line. The median of the resulting world income distribution is at 20.0 $/day, whereas the mean of the mixture is at an income of 39.9$/day and the mode (on the log-base-2 scale) is 17.1$/day. Note that the later is not transformation invariant, i.e. the value is not the mode of the income distribution, but of \(\log_2(X)\).

To get the income mountain plots as shown in Factfulness, we additionally need to obtain number of people on the \(y\)-axis and not density. We do this by partitioning the x-axis into non-overlapping intervals and then compute the number of individuals expected to fall into a given interval with limits \([l, u]\). Under our model this expectation is

where \(F_{\text{mix}}\) is the CDF of the mixture distribution and \(n\) is the total world population. The mountain plot below shows this for a given partition with \(n=7,305,116,647\). Note that \(2.5\cdot 10^8\) corresponds to 250 mio people. Also note the \(\log_2\) x-axis, and hence (on the linear scale) unequally wide intervals of the partitioning. Contrary to Factfulness’, I prefer to make this more explicit by indicating the intervals explicitly on the x-axis of the mountain plot, because it is about number of people in certain income brackets.

This can then be plotted with ggplot2: 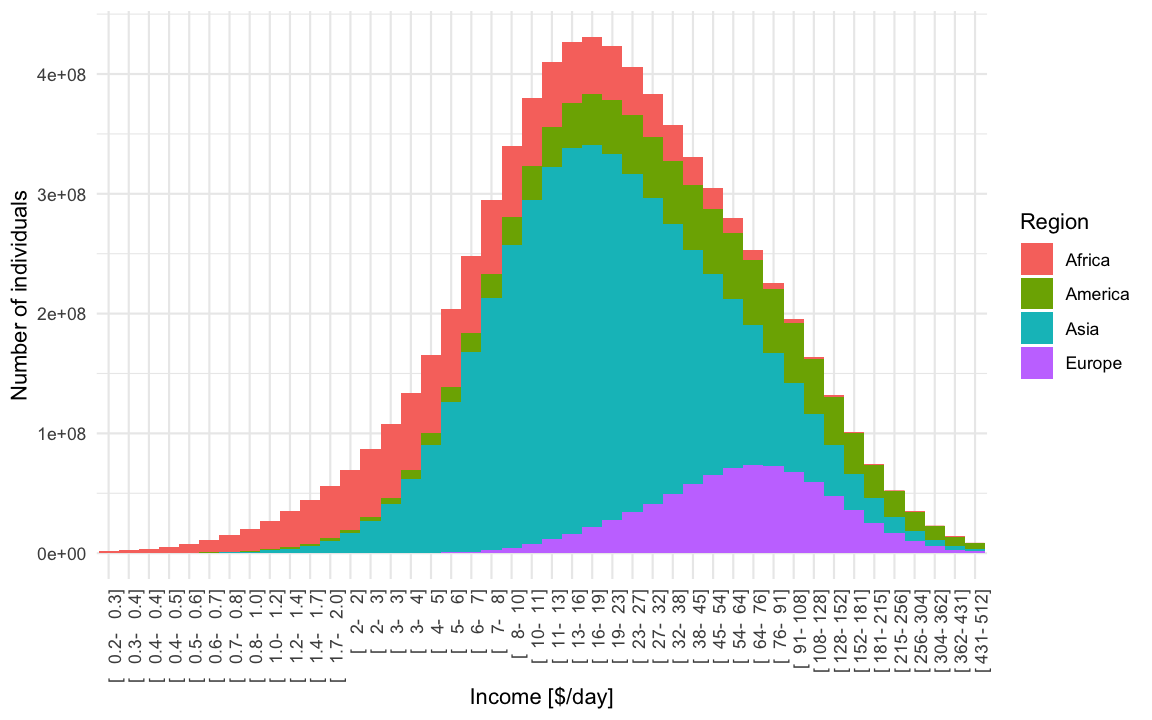 In light of all the talk about gaps, it can also be healthy to plot the income distribution on the linear scale. From this it becomes obvious that linearly there indeed are larger absolute differences in income, but -as argued in the book- the exp-scale (base 2) incorporates peoples perception about the worth of additional income. 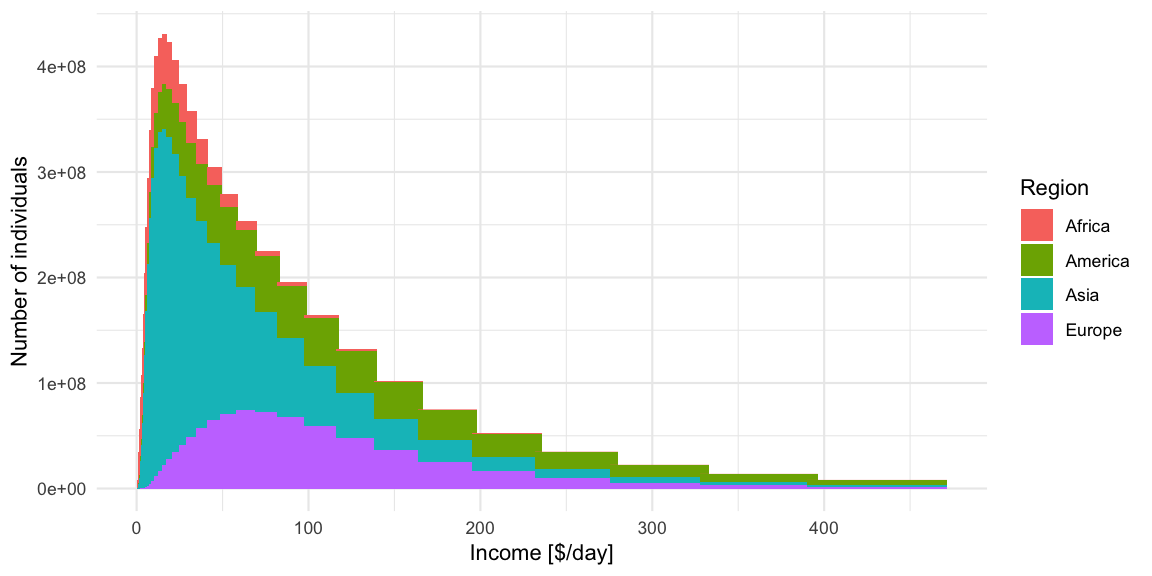 Because the intervals are not equally wide, only the height of the bars should be interpreted in this plot. However, the eye perceives area, which in this case is misguiding. Showing histograms with unequal bin widths is a constant dilemma between area, height, density and perception. The recommendation would be that if one wants to use the linear-scale, then one should use equal width linear intervals or directly plot the density. As a consequence, plots like the above are not recommended, but they make obvious the tail behaviour of the income distribution - a feature which is somewhat hidden by the log-base-2-scale plots.

Of course none of the above plots looks as nice as the Gapminder plots, but they have proper x and y-axes annotation and, IMHO, are clearer to interpret, because they do not mix the concept of density with the concept of individuals falling into income bins. As the bin-width converges to zero, one gets the density multiplied by \(n\), but this complication of infinitesimal width bins is impossible to communicate. In the end this was the talent of Hans Rosling and Gapminder - to make the complicated easy and intuitive! We honor this by skipping the math1 and celebrate the result as the art it is! 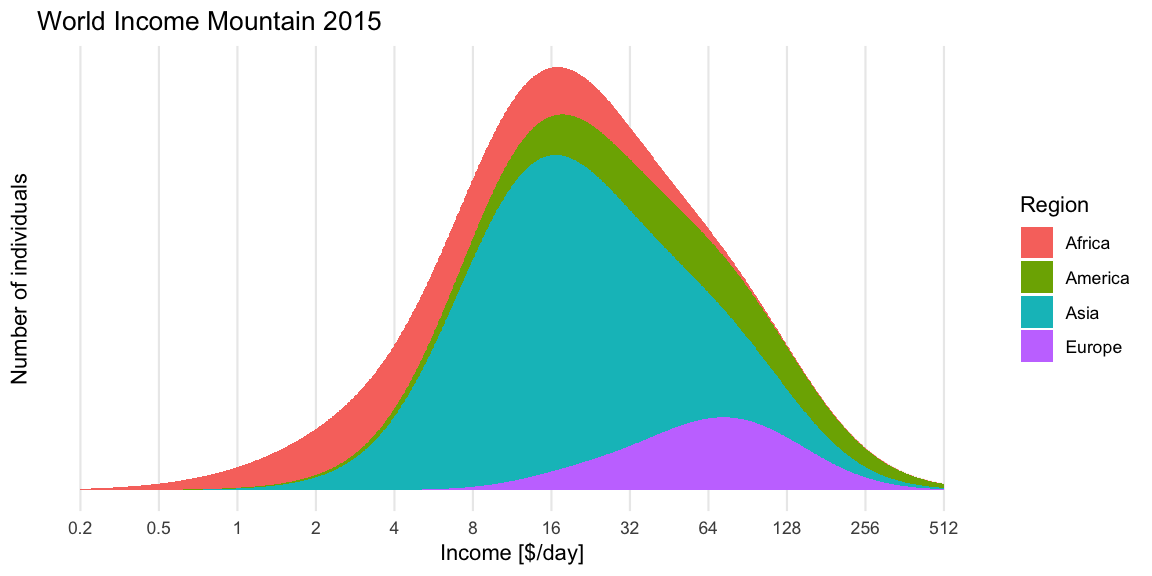 Our replicated mountain plots do not exactly match those made by Gapminder (c.f. the screenshot). It appears as if our distributions are located slightly more to the right. It is not entirely clear why there is a deviation, but one possible problem could be that we do the translation into income per day differently? I’m not an econometrician, so this could be a trivial blunder on my side, however, the values in this post are roughly of the same magnitude as the graph on p. 45 in van Zanden et al. (2011) mentioned in the Gapminder documentation page, whereas the Gapminder curves appear too far to the left. It might be worthwhile to check individual country data underlying the graphs to see where the difference is.
Edit 2018-07-05: I checked this and read the documentation again more carefully: Apparently, Gapminder uses mean household income (or consumption) per person per day (measured in PPP$ 2011) opposite to the GDP/capita used in the scientific literature they quote and for which you can download the data from their website. To me this was not clear when reading Factfulness and, unfortunately, there is no documentation for how exactly their mean household income value per individual is computed from the GDP/capita.2 For the sake of illustrating the dynamics in the world income the difference in scale is not that important, though.

We end the post by animating the dynamics of the income mountains since 1950 using gganimate. To put it in possibilistic terms: Let the world move forward! It is not as bad as it seems. Facts matter.