Inspired by the recent March For Science we look into methods for the statistical estimation of the number of people participating in a demonstration organized as a march. In particular, we provide R code to reproduce the two on-the-spot counting method analysis of Yip et al. (2010) for the data of the July 1 March in Hong Kong 2006.

Exercising your democratic right to express support for a cause by demonstration has found anew usage. The March for Science is a recent examples of such a demonstration inspired by recent political developments. The number of persons participating in such marches is the indicator by which the support of the cause is measured. Crowd size estimates have therefore always been subject to political interpretation and, hence, possible politically motivated bias. In this work we focus on what statistics has to offer with respect to finding the true number of participants. A good overview of this task’s challenges is given in Watson and Yip (2011). A particular difficulty is the size estimation of moving crowds as seen in marches.

As case study we replicate the analysis of Yip et al. (2010) on estimating the number of participants in the 1st of July Marches in Hong Kong. Since the handover to China in 1997 these marches have been conducted yearly to demonstrate for democracy and freedom of speech in Hong Kong. Below is shown the 3.6 km long demonstration route from Victoria Park to Government Headquarters for the 2006 demonstration as described by Yip et al. (2010). A youtube video of the 2006 demonstration illustrates this better than words.

In order to estimate the number of participants a two on-the-spot counting method was devised by Yip et al. (2010): Two points along the march were selected as shown in the above map: Point A denotes the location after which an individual is counted as being part of the march. In order to take into account that people join the march at a later point than A, a second point B is selected to adjust the count at A for such late entries. Three to four persons were stationed at each of the two counting locations. Once the demonstration passed the respective point each of them started to count the number of people passing in a one-minute intervals. They counted for one minute every 5 minutes until the last person of the march had passed the counting point.

We store the resulting counting data displayed in Table 2 and Table 3 of Yip et al. (2010) as two Excel-files. In a data pre-processing step these are then read and combined into one data.frame containing the columns Y1-Y4. Furthermore, we re-format the table’s time specification to proper POSIX formatted date-times. The exact data dancing steps can be found in the accompanying Rmd code of this post. Altogether, this yields a tbl with the first couple of lines looking as follows:

A time series for the individual counts as well as their mean is shown below. One observes that at point B the intensity of the crowd was lower, as the observation had stretched over a larger distance. The later is seen from the time span between the first and last count for the two points: approximately 1:45h for A vs. 2:45h for B. 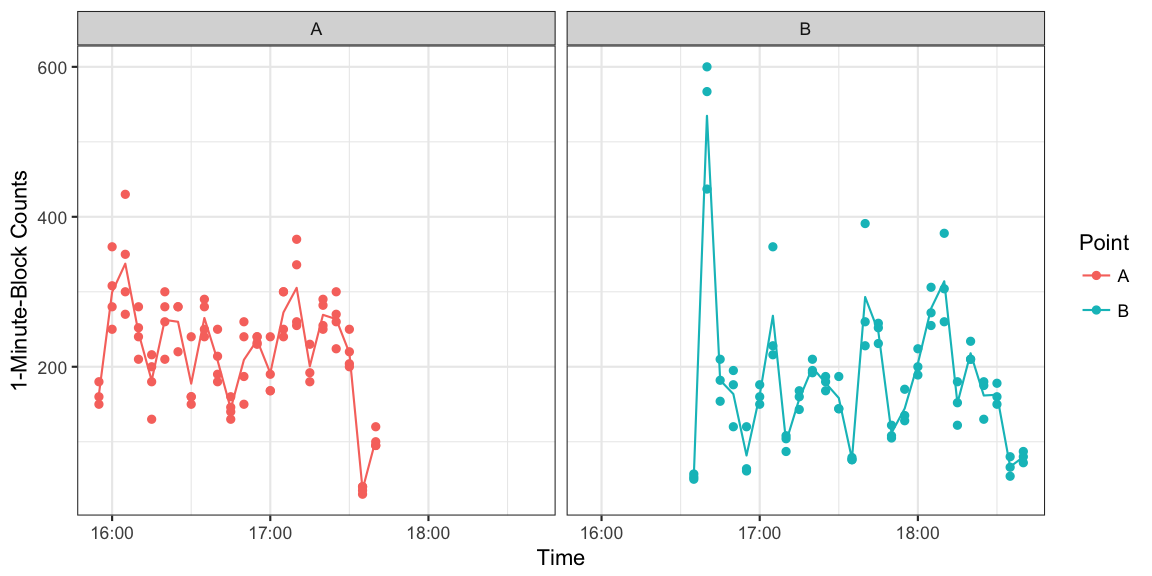 is the average of the observer’s counts at point \(X\) for time \(t\). By scaling up each observer’s observations to account for the time blocks without a count and averaging over the different observers we get an estimate for the number of participants at point \(X\):

In order to adjust the estimate at point \(A\) for people who joined the march after point \(A\), we perform an independent counting at point \(B\) and additionally ask \(m\) people at point \(B\), whether they marched past point \(A\) or not. Denoting \(\hat{\phi}\) the fraction of people answering yes to this question the two on-the-spot counting estimator is \[ \hat{N} = \hat{N}_A + (1-\hat{\phi}) \hat{N}_B. \] Note that this estimator does not take into account that people could potentially leave the march between \(A\) and \(B\) and that its also possible to join the march after \(B\). However, the proportion of such participants is assumed to be negligible.

The above equations have been implemented as function two_on_the_spot_N in R, which given a counts data.frame computes the estimate and a corresponding confidence interval. The github code of this post contains the details.

Our estimate for the number of participants is thus around 26400 with a 95% confidence interval of 25600-27200. For comparison the authors state that the Hong Kong Police’s estimate was around 28000, whereas the organizers claimed a size of 58000.

We were able to reproduce the results of Yip et al. (2010) using the article’s data (up to some rounding issues). An R function is now available for supporting mobile crowd estimation in the future. It will be interesting to synthesize the traditional and easy to implement counting approach described above with more modern data sources such as mobile phone or twitter data (Botta, Moat, and Preis 2015). 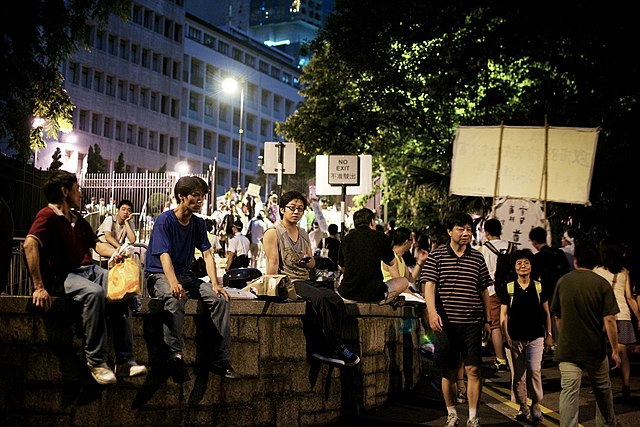