We use US Social Security Administration data to compute the probability of a name clash in a class of year-YYYY born kids during the years 1880-2014. 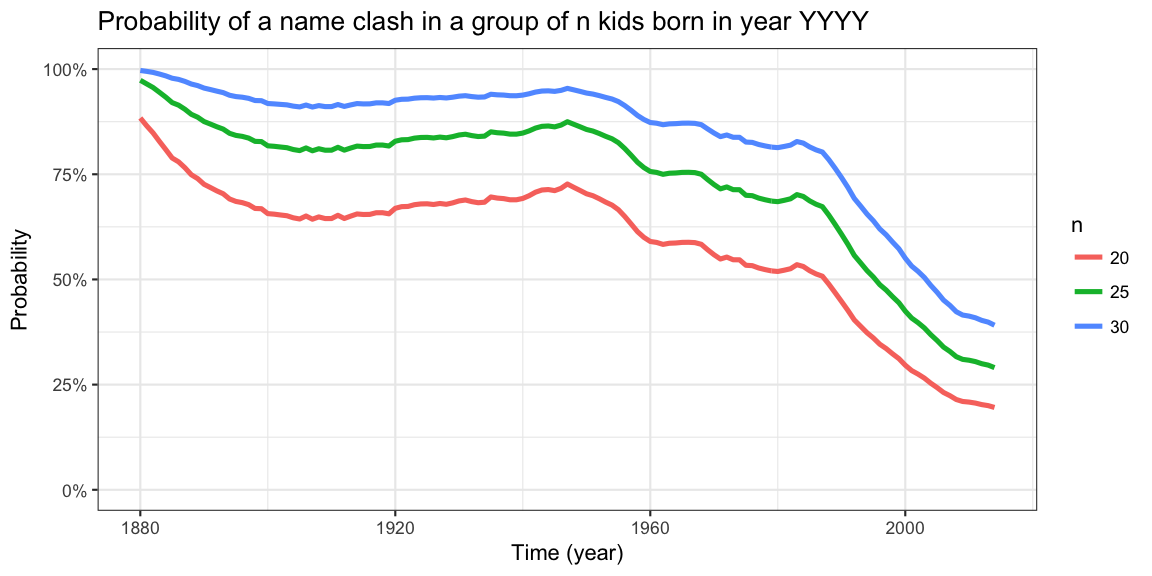 After reading a cool post by Kasia Kulma on how the release of Disney films have an impact on girl namings in the US, I became aware of the babynames package by Hadley Wickham. The package wraps the data by the USA social security administration on the frequency of all baby names each year during the period 1880-2014 in the US. Because the data fit phenomenally in spirit to this blog’s two previous posts on onomastics and the birthday problem with unequal probabilities, we use the data to extend our name analyses in temporal fashion.

Check how many babies and how many unique first names are contained in the data each year: We see that the number of live-births remains at an approximately stable level the last 50 years, whereas the number of unique names kept increasing. Note that for reasons of privacy protection, only names with 5 or more occurrences in a given year, are contained in the data. We therefore investigate the proportion of babies, which apparently have been removed due to privacy protection of the names. This is done by investigating the sum of the proportions column for each year. If all names would be available, the sum per year would be 2 (1 for each gender). It becomes clear that a non-negligible part of the names are removed and the proportion appears to vary with time. As a simple fix, we re-scale the yearly proportions per year s.t. they really sum to one.

The data are perfect for testing the name-collision functionality from the previous Happy pbirthday class of 2016 post. Since the writing of the post, the pbirthday_up function for computing the name collision probability, which is an instance of the birthday problem with unequal occurrence probabilities, has been assembled into a preliminary birthdayproblem R package available from github.

We can now easily calculate for each year the probability that 2 or more kids in a class of \(n\in \{20,25,30\}\) kids all born in a given year YYYY will have same first name: It looks like the name distribution has become more diverse over time, since the collision probability reduces over time. However, some bias is to be expected due to the removal of names with frequencies below 5 in a given year.