Carrying the Danish tradition of Juleforsøg to the realm of statistics, we use R to classify the figure content of Kinder Eggs using boosted classification trees for the egg’s weight and possible rattling noises. 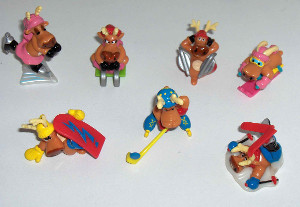 A juleforsøg is the kind of exploding experiment happening in the last physics or chemistry class before the Christmas vacation. Not seldomly the teacher, with a look of secrecy, initializes the class by locking the door mumbling something like “the headmaster better not see this…”. With Christmas approaching fast, here is an attempt to create a statistical juleforsøg concluding the Theory meets practice 2016 posting season:

The advertisement campaign of the Kinder Surprise Eggs aka. Kinder Joy claims that the content of every 7th egg is a figure (see example) - otherwise they contain toys or puzzles, which positively can be described as junk. Figures, in particular completed series, on the other hand, can achieve high trading values. The clear goal is thus to optimize your egg hunting strategy in order to maximize figure content.

Your budget is limited, so the question is which egg to select when standing in the supermarket?

Photo: Price in SEK per egg in a Swedish supermarket. The red ellipse shows the price per kg.

It goes without saying that brute force purchasing strategies would be insane. Hence, a number of egg selection strategies can be observed in real life:

We shall in this post be interested in the statistician’s egg selection approach: Egg classification based on weight and rattling noise using ‘top-notch’ machine learning algorithms - in our case based on boosted classification trees.

We collected n=79 eggs of which 43.0% were figures - the data are available under a GPL v3.0 license from github. For each egg, we determined its weight as well as the sound it produced when being shaken. If the sounds could be characterized as rattling (aka. clattering) this was indicative of the content consisting of many parts and, hence, unlikely to be a figure.

Altogether, the first couple of rows of the dataset look as follows.

The fraction of figures in the dataset was 34/79, which is way higher than the proclaimed 1/7; possibly, because professionals egg collectors were at work…

Of the 79 analysed eggs, 54 were categorized as non-rattling. The probability of such a non-rattling egg really containing a figure was 51.9%. This proportion is not impressive, but could be due to the data collector’s having a different understanding of exactly how the variable rattling was to be interpreted: Does it rattle, or does it rattle like a figure? In hindsight, a clearer definition and communication of this variable would have prevented ambiguity in the collection.

A descriptive plot of the weight distribution of eggs with and without figure content shows, that eggs with figures tend to be slightly heavier:

Note: The first approximately 50% of the eggs were weighted on a standard supermarket scales, which showed the resulting weight in even steps of 2g only.

Below the proportion (in %) of eggs with figure content per observed weight:

A simple selection rule based on weight would be to weigh eggs until you hit a 40g egg. A slightly less certain stopping rule would be to pick 34g eggs. However, modern statistics is more than counting and analysing proportions!

The average AUC for the 64 resamples is 0.69. Average sensitivity and specificity are 84.0% and 42.1%, respectively. This shows that predicting figure content with the available data is better than simply picking an egg at random, but no figure-guaranteeing strategy appears possible on a per-egg basis.

Suppose the egg you look at weighs 36g and, when shaken, sounds like a lot of small parts being moved. In other words:

Despite the rattling noises, the classifier thinks that it’s slightly more likely that the content is a figure. However, when we opened this particular egg:

…a car. Definitely not a figure! The proof of concept disappointment was, however, quickly counteracted by the surrounding chocolate…

As a standard operating procedure for your optimized future supermarket hunt, below are shown the classifier’s predicted probabilities for figure content as a function of egg weight and the rattles_fac variable. The present post only discusses the optimal selection on a per-egg basis. One could weight & shake several eggs and then select the one with the highest predicted probability for containing a figure. Future research is needed to solve this sequential decision making problem in an optimal way.

We have retained a validation sample of 10 eggs and are willing to send an unconsumed 11th element of the sample to whoever obtains the best score on this validation sample. Anyone who knows how to upload this to kaggle?

We wish all readers God jul and a happy new year!

Thanks to former colleagues at the Department of Statistics, University of Munich, as well as numerous statistics students in Munich and Stockholm, for contributing to the data collection. In particular we thank Alexander Jerak for his idea of optimizing figure hunting in a data driven way more than 10 years ago.